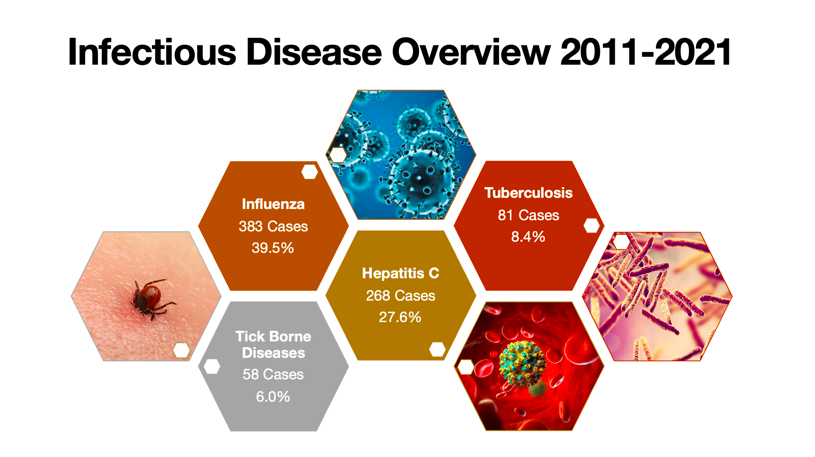 The picture above shows a brief insight on the 4 most common infectious diseases in Webster over the past 10 years.

Click through each screen to the right to see the data for each disease.

Please note, COVID-19 data was not included in this data.

This report only reflects confirmed and probable cases reported into Massachusetts Virtual Epidemiological Network (MAVEN). Additional cases could have been present in the absence of testing or reporting. 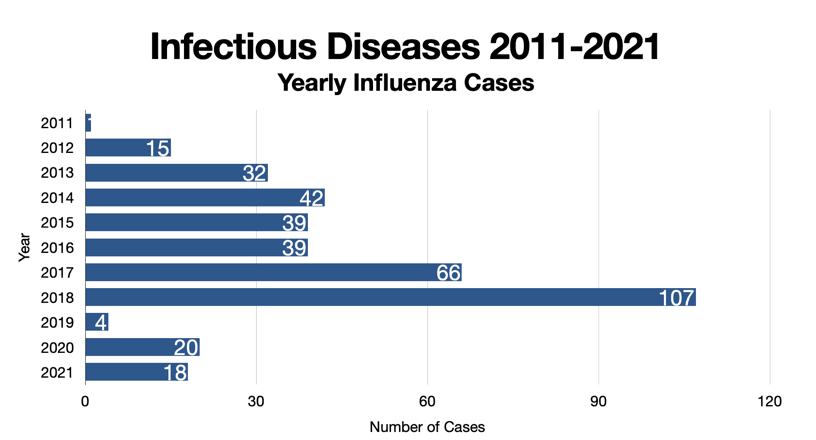 Click HERE to view an educational sheet on Influenza from the CDC.

Influenza, also known as the flu is a virus that effects the respiratory system which includes the nose, throat and lungs.

The flu spreads by droplets of salvia and mucus from the sick person carrying the virus.

Symptoms can include: fever, cough, sore throat, body aches, chills, runny nose, fatigue. Symptoms can last from a few days to a week or more. Whenever you have any of these symptoms it is important to stay home and away from others. Call your healthcare provider to be tested for the flu and other viruses, like COVID-19.

How can I protect myself from the flu?

It is important to get your annual flu shot as soon as the vaccine becomes available.

Wash your hands and use hand sanitizer, especially after sneezing and coughing.

Cough and sneeze a tissue or your elbow if a tissue is not available.

Clean items that are touched often, like doorknobs, phones and children’s toys.

Stay home when you are sick. Do not have physical contact with people who are sick.

Click HERE to view an educational sheet from the CDC on Tuberculosis.

Tuberculosis also known as TB is an illness caused by a bacteria called Mycobacterium tuberculosis.

People infected with TB can have one of two TB-related conditions; latent TB infection and TB disease.

How is Tuberculosis spread?

TB bacteria is spread through the air from person to person, through coughing, talking or singing.

People who are around the infected person may breathe in the bacteria.

It is important to note that TB is not spread through shaking hands, touching bed linens or toilet seats, sharing food or drinks or kissing.

Latent TB Infection is when someone is infected with Myobacterium tuberculosis, but has no symptoms and cannot spread the bacteria to other people.

With TB disease, people have symptoms and feel sick. They can have a bad cough, pain in their chest, sometimes they may cough up blood, weight loss, fevers and night sweats. See here

When infected with TB disease, the person may spread TB disease to others.

People with TB disease do not always show symptoms immediately, sometimes it can be years.

If you think you have been exposed to someone with TB disease, you should contact your doctor or local health department about getting a TB skin test or a special TB blood test. Be sure to tell the doctor or nurse when you spent time with the person who has TB disease.

Information from Centers of Disease Control and Prevention see HERE for more information. 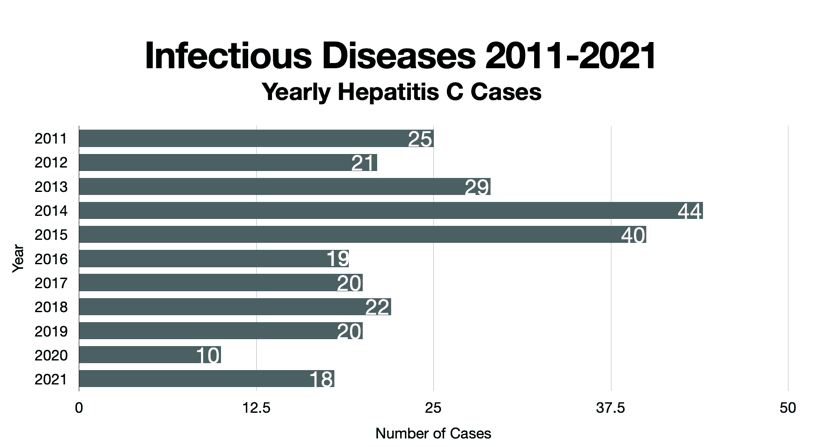 Click HERE to view an educational sheet from the CDC on Hepatitis C.

Hepatitis is inflammation of the liver. There are many reasons that hepatitis can occur.

Hepatitis C is a liver infection that is caused by the hepatitis C virus.

How is Hepatitis C spread?

The virus is spread by direct contact with blood.

This means that it can be spread through bodily fluids that have blood in it.

Sharing personal items like toothbrushes, razor, nail clippers and other items that may have blood on it.

Sometimes people may not have symptoms, or may have mild symptoms

Always call your doctor if you are concerned that you have been exposed to Hepatitis C. 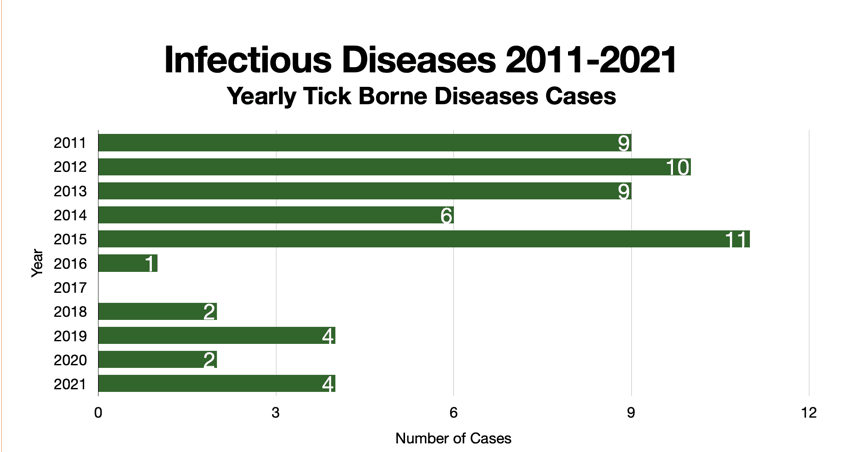 Click HERE to view an educational sheet on Lyme disease from the CDC.

Lyme disease is a bacteria that is spread by black-legged also known as deer ticks.

How do I get Lyme disease?

From a bite of an infected black-legged (deer) tick, typically the tick has to be attached to a person for at least 24 hours.

Sometimes black-legged ticks carry bacteria cause babesiosis and human granulocytic anaplasmosis which is discussed below. This can occur with one bite.

You can get Lyme disease at any time, but young ticks are seen more between May and July. Adult ticks are more active in the spring and fall but can be out at any time the temperatures are above freezing.

Symptoms can appear between 3 to 30 days.

When people get treatment in the early stage (days to weeks) they may notice symptoms like a rash where the tick was attached that starts with a small red area that spreads out and looks like a donut.

If it goes untreated, a rash may appear again and it can go into later stages.

Later stages (weeks to years) can cause serious problems. Sometimes rashes do not appear.

In the later stages, symptoms could affect the joints, nervous system and heart.

Treatment is usually done by antibiotics.

Click HERE to view an educational sheet on Babesiosis from the CDC.

It is a disease caused by a microscopic parasite and it infects red blood cells in the body.

How can I get Babesiosis?

From the bite of an infected black-legged tick. Typically the tick has to be attached 24-36 hours for the parasite to spread. The longer it is attached, the more likely it is that the parasite spreads.

Symptoms may appear from 1 to 8 weeks after being bitten.

Most of the time, symptoms are mild or not shown. Some of the symptoms include fever, chills, headache, muscle and joint aches, fatigue, nausea, vomiting, abdominal pain and dark urine.

Some groups with weakened immune systems may have life-threatening symptoms.

Babesiosis is treated with symptoms and should be treated early to avoid blood and kidney problems.

It is a bacteria that attacks certain types of white blood cells and granulocytes.

How can I get HGA?

From the bite of an infected black-legged tick. The longer it is attached, the more likely it is that the parasite spreads.

Symptoms of HGA typically appear 7 to 14 days after being bitten.

Symptoms include fever, headache that usually does not get better with over-the-counter medication, chills, muscle and joint aches and fatigue. Sometimes people have GI symptoms.

HGA is treated with antibiotics and should be treated as soon as possible to avoid life-threatening complications.

Watch THIS video for more information from the CDC.