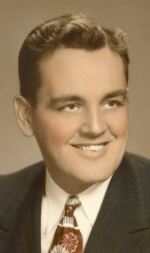 He leaves a daughter, Barbara T. Khouri and her husband George A. of Greenwich, Connecticut; 2 grandchildren, Alexandra Khouri of New York City, and Christopher Khouri, in his junior at the University of Pennsylvania; 2 brothers, Chris Tanca of Dudley and Van Tanca of Hollywood, Florida; 2 sisters, Ernie Rucho and Betty Mitro, both of Charlotte, North Carolina; and nephews and nieces.

He was born and raised in North Grosvenordale, Connecticut, a son of Leo P. and Sophie (Cuistica) Tanca. He lived in Webster for 25 years before moving to Deltona, Florida in 1975. He graduated from Tourtellotte Memorial High School.

He was a World War II Army Air Force Veteran, serving as a navigator, bomber pilot and captain. He then was in the reserves for many years, retiring as a lieutenant colonel. He was awarded the Distinguished Flying Cross.

Mr. Tanca was a member of the Webster Police Department for 25 years, retiring as a sergeant in 1975.

The funeral was held Friday, January 26, from the Sitkowski and Malboeuf Funeral Home, 340 School Street with a service at 1 p.m. in Sts. Constantine and Helen Greek Orthodox Church, 35 Lake Parkway. Burial was in West Thompson Cemetery, Thompson, Connecticut. Calling hours are from 7 to 9 p.m. Thursday, January 25, in the funeral home, with a Trisagion service at 8 p.m. The Webster Lodge of Masons performed their ritual at 7:30 p.m.