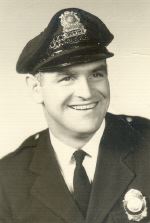 He leaves his wife of almost 59 years, Eleanor B. (Murzynowicz) Noga; a daughter, Sheryl Ann and her husband Rudy Bergeron of Webster; 2 sisters, Wanda Lawless and Benita Mooney both of Rhode Island; 2 grandchildren, Megan R. and her husband Jon Belanger and Matthew R. Bergeron all of Webster; nephews and nieces; great nephews and great nieces. He was predeceased by 3 brothers and a sister.

He was born in Dudley, a son of Stanley M. and Stella P. (Augustynski) Noga. He graduated from Bartlett Vocational High School in 1943.

He was an Navy Veteran of World War II.

Mr. Noga was a Sergeant with the Webster Police Department for 34 years retiring in 1987. He was also a deputy sheriff for 18 years, a member of the Webster Housing Authority and an Inspector for the Webster Board of Health for 10 years.

He was a member of Saint Joseph Basilica and its Holy Rosary Sodality. He also belonged to the Fraternal Order of Police, the Webster Lodge of Elks Number 1466, the American Legion, the Disabled American Veterans, the Polish American Veterans and the T.SK.K. Mr. Noga could be found at McDonald’s every morning enjoying coffee with his friends. He was a devoted family man who lived for and would do anything for his family.

The funeral was held Tuesday, October 7, from the Sitkowski and Malboeuf Funeral Home, 340 School Street, Webster, with a Mass at 10 a.m. in Saint Joseph Basilica, 53 Whitcomb Street. Burial, with military honors, was at Saint Joseph Cemetery. Calling hours were from 5 to 8 p.m. Monday, October 6, in the funeral home.